Transformation required from financial institutions in an uncertain market

11.24.2016 7 min
Share this post
Address by Olivier Klein at the inaugural roundtable discussions on "Strategic transformation in an uncertain world", during the 7th annual Global Financial Services Leadership conference organised by A.T. Kearney on 25 October 2016. 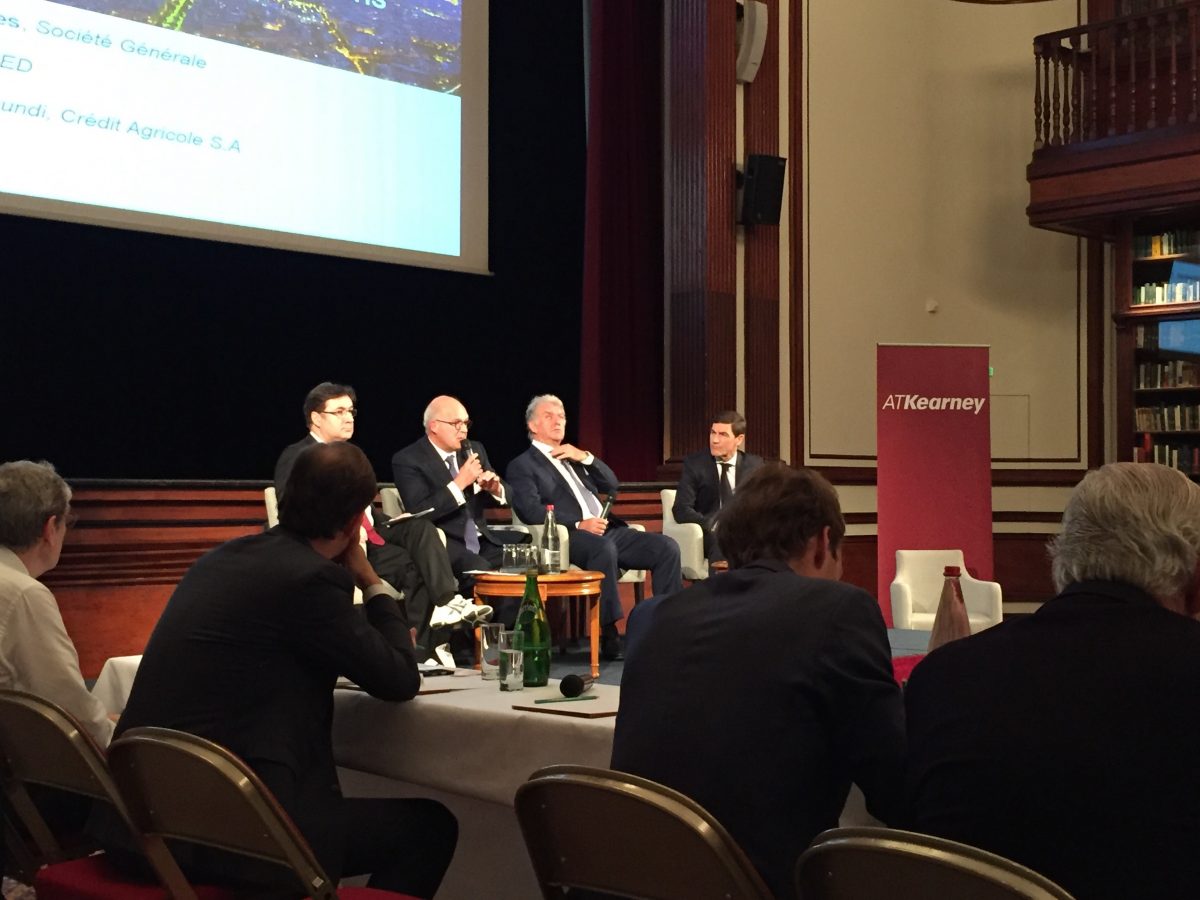 What changes must the banks face in their new major challenges ?

What is the fundamental role of the banks?

Were the regulator to excessively restrict banks’ ability to play their role due to the dangers of them taking on a significant proportion of such risks, even though this is their very raison d’être, the risk would inevitably fall elsewhere. In the economy, households, companies and other economic players with financing capacity exhibit the propensity to invest over the short term in the interests of maintaining liquidity. Such funds, via banks, notably in Europe, are placed with other households and companies, which generally seek to borrow over the long term. This inevitably generates credit, interest and liquidity risk. Were the banks no longer to bear such risk, or only do so to a lesser extent, by definition the risk would be transferred directly onto the public and companies, or indirectly via institutional investors.

It is therefore important to ensure that regulation, which is fully legitimate in the financial domain as finance is procyclical by its very nature, does not introduce additional risks. Were it to impose too many constraints on the banks, it could shift the risk initially taken on by the banks to less regulated areas. With the possible consequence of generating new systemic risks. Insurance companies are generally subject to strict regulation, but this does not always affect credit activities, even though their expertise in this area is not as developed as that of the banks. For their part, funds are not regulated in terms of either credit or liquidity.
Such shifting of systemic risk must therefore be viewed by the regulator from a global standpoint. Any excessive restriction of the risk borne by the banks would be to underestimate their fundamental economic role. This does not mean that bank solvency ratios should not be increased or that liquidity and other ratios should not be introduced in response to the crisis of 2007-2008. On the contrary, but it is all a question of degree.

The banks must adapt to three major changes in their operational activities: as mentioned earlier, stricter regulation as well as very low interest rates and digital technology.

Regarding regulation, ultimately the reforms will have imposed a near doubling of bank equity for the same level of inherent risk, i.e. in order to perform the same activities. Since 2007, we have observed that European banks are following this course given that they have already increased their total equity by nearly two-thirds. On the one hand, increasing equity with the same levels of business activity and risk naturally means lower profitability. Currently this is systematically reducing return on equity below the cost of capital. In such a scenario, either the cost of capital must fall, with the markets accepting that the banks are less profitable, as by definition they are carrying less risk, or we will be confronted by a perennial problem which must be resolved, one way or another.

On the other hand, we must accept that if the banks fail to adequately increase their equity they must naturally reduce their activity levels. Is this happening? Fortunately, notably in France, up to now the banks have continued to issue credit without rationing. This is less true in Southern Europe. Having said that, for its part the demand for credit has not yet reached the previously high levels of growth. Should the demand for credit rise, the banks would without doubt encounter difficulties. And here arises the question of the financing of growth. In France, if we added to Basel III what is currently being planned for Basel IV in terms of solvency ratio, as things currently stand credit production would suffer. Although it may appear reassuring to believe that market finance could mitigate this effect, it should be noted that in Europe this market is in reality very small in the overall financing of the economy. Bank financing offers a number of advantages, notably the greater stability of the financial system and the financing of the economy as the banks are well regulated and supervised. Nor, indeed, did French banks suffer worst from the crisis of 2007-2008. Furthermore, the European model would need time to adapt in order to further develop market finance. In the meantime there would be a risk for growth, which represents the best of the solutions to the problems of over-indebtedness. Overall, the large global banking groups have in reality been forced to exit certain activities, or at least to review their portfolio of activities in order to comply with the higher regulatory capital requirements. Anything not identified as being sufficiently synergistic may be disposed of, which obviously partly restructures the banking and financial landscape, notably in terms of activities not in the banks’ domestic territory.

However, a number of factors need to be taken into account: the negative rate effect which may also produce gains in the event of fixed-rate bonds in the balance sheet, but this factor is not fundamental; lower cost of credit risk due to the slight economic upturn. This last factor was very visible in 2015 and even more so in the first half of 2016, when it was able to offset the negative rate effect and insufficient volume effect. In other words, had there not been a lowering of the cost of risk in the first half of the year, aggregate results of French commercial banks would have seen a fall. But this did not happen as the cost of risk fell faster than the net interest margin. This dynamic is not recurrent and the cost of risk cannot fall indefinitely, while the effect of long-term interest rates, should they continue to stay low, would be recurrent. For different reasons, including the one just mentioned, we must hope that the central bank gradually raises rates, yet without waiting too long. Yet it is also possible to retain low rates, without approaching zero, should the growth situation so require, but while recreating an adequate slope of the rate curve. On the one hand, the effect of very low, and even negative, rates appears to be running out of steam from the macro-economic point of view, while on the other hand, if the results of the banks are affected over the long term, they will be less able to offer the necessary credit while at the same time complying with higher solvency ratios.

The last point, and none the less interesting, is the impact of digital. We are all observing fewer customers visiting our branches, but does this represent a problem or an excellent opportunity to establish strengthened relationships with higher added value? Customers visit the branch less frequently because they perform fewer transactions there (transfers, paying in cheques, cash withdrawals, etc.) and because digital solutions enable them to perform so many transactions by mobile phone or other remote device, just as ATMs enable them to do so without speaking to an advisor and without waiting. In Europe, certain banks are based on essentially transaction-oriented models. Such banks have good reason to be concerned and to reconsider the future of their network, as they have not been set up nor do they possess the culture to develop other activities. If we consider the case of banks in France, they are generally structured around a model based on a high level of interaction and transactions. Automation and digitalisation of transactions could therefore present an opportunity to increase their commercial productivity and to much better deploy their sales personnel around a model of global client relationships, enhancing interaction with high added value based on providing advice. This would clearly require significant investment in digital as it enhances and facilitates the day-to-day activities of our customers, sales staff and middle and back offices alike, while improving commercial added value by exploiting the power of big data and artificial intelligence. We will then progressively increase the capacity of our sales staff to produce added value. As far as imagining a model where advice would be provided without sales personnel, for the reasons of the global relationship model and customer psychology, we are not convinced that such a scenario could become operational in reality. What I like to call “the human augmented by the digital” probably has a great future.

The right policy of optimising distribution and reorganising the branch network as a vehicle of reinforced added value associated with a restructuring of the banking interaction model, which require significant transformation and investment in both human capital and digital, could enable us to maximise results without necessarily significantly reducing the number of branches and sales staff. Of course, serious consideration needs to be given to Fintech developments with their capacity for “uberisation” and circumvention of the banks, but it is our conviction that the bank based on personal relationships within a global relationship model is in a strong position as it already has the clients. Provided it is able to further improve its data management in order to further improve the global relationship model. Especially in a digital world, wealth is created by the capacity to maintain a high number of customers whose data is effectively exploited in order to provide them with greater added value, leading to greater loyalty. This is the key. In the Fintech sector we are also noticing the first serious difficulties, notably in the USA, due to the lack of their own customers, even though some of them have a promising future ahead of them, particularly when working in collaboration with the banks. Conversely, the banks have a very great strength based on their customer capital which enables them to be offensive, and possibly to integrate Fintech providers and develop digital processes. This enables them to formulate interesting service and advisory products for their customers. Yet alongside this banking model, many others are already emerging and may soon coexist within the same territory.

Even though there are many headwinds, there also exist many opportunities for success. But regulation must not introduce too many more constraints, or even review certain existing requirements, in order to avoid simply shifting the causes of systemic crises. We must also exit the world of very low rates or at least see an upswing in the virtually flat rate curve. Finally, digital technology presents a real opportunity to redevelop an attractive banking industry while improving its operational efficiency and its global relationship model, this latter element being one of the strong points of French banks on which we can and must capitalise. Even if we must coexist with other banking models in the future.