Not repaying our debt: risk of a loss of trust in money and risks for society 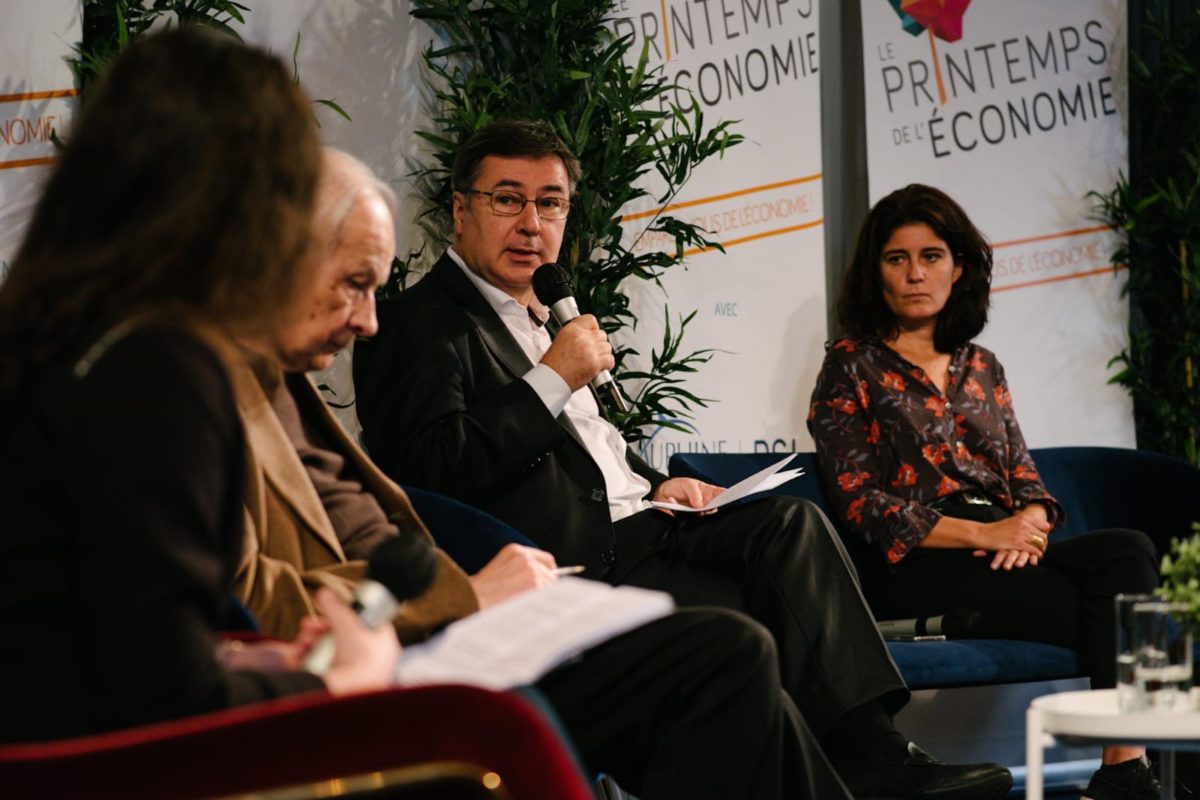 The members of the round table were:

Here is a transcript of my talk for Printemps de l’Economie.

Not repaying our debt: risk of a loss of trust in money and risks for society

We are in the middle of an unprecedented and potent crisis due to the pandemic. The response from Governments and central banks has so far been strong and appropriate. The budget and monetary policies that have been put in place come down to a temporary lifting of monetary restrictions, in other words, of spending limits. Households were still been paid if employers were no longer able to settle wages, which was crucial to avoid the economy collapsing altogether, thanks to furlough schemes. Funding has been set aside to cover the losses of several companies who, during this time, were quite simply unable to find the money to pay their costs since their fall in turnover. This was entirely necessary to protect not only demand, but also our future supply capacity. However, during normal times monetary restrictions are, strictly speaking, essential for the economy to function.

Governments who have drastically increased their spending and continue to do so, despite a slump in tax revenues, have themselves benefited from a lifting of the monetary restrictions placed on them thanks to the central banks who have been buying up public debt at will.

Central banks have injected a lot of liquidity into the financial markets to help them stay on tracks. They have also been supporting companies by buying their debt. In this way, the central banks have both directly and through the banks helped ensure sufficient funding for the economy.

However, going on the basis that these policies were unavoidable in our attempts to protect the front line, we have to ask what happens next, once we return to normal, and have to deal with the massive debt?

Failure to repay public debt to private creditors would have serious consequences for both the economy and society. Even supposing that the law allowed us to get way with not repaying only the central bank – which is not in fact the case – then given that the Governments are its shareholders, we would in fact be playing a zero-sum game.

The only option would be to set up near-perpetual funding of public debt from the central bank at a rate close to zero.

Even were it possible to repay the additional debt generated by the pandemic in this way, could this solution be extended to all debt, including to future rises in public debt?

Surely this is akin to believing in a magic money tree? Put another way, the question is this: we have found ways to fund things that, yesterday, we thought were impossible to fund; so why can’t we continue doing so forever? Especially since interest rates are very low and below the rate of growth, so the solvency position of private lenders and Governments could, in theory, be protected. However, current interest rates and growth rates are only two contributory factors of solvency – a further crisis could be triggered by a fall in incomes and not only by a rise in interest rates -, of financial stability and, more generally, of confidence.

What is needed is large-scale theoretical analysis to determine whether permanent and increasing degrees of quantitative easing would be possible i.e. keeping interest rates close to zero, allowing the Government to spend more without limits, and private parties to increase their debt without restriction.

However, a policy of endless quantitative easing would not work and should be rejected. Primarily due to the massive repercussions it would have for financial instability. Keeping interest rates too low for too long, whilst the economy returns to normal growth – which we are far from achieving – would ultimately encourage, or even generate and develop financial cycles. In other words, it would encourage larger and larger speculative bubbles which would then pop. We are all too familiar with this phenomenon of financial cycles driven by rapid credit growth combined, in a self-sustaining loop, with a speculative stock or real estate bubble. These phenomena are widely documented and are extremely dangerous because they give rise to major economic and financial crises.

Finally, in the longer term, people could end up shunning the currency altogether. If the spending limits, and therefore monetary restrictions, remain lifted for too long, it is people’s trust in money that will be affected, because the monetary system is essentially a system for the repayment of debts. And as we know, it is the system that gives transactions their coherence and, more importantly, makes the economy work. A crisis of confidence could therefore be triggered by a loss of trust in the validity of receivables and debts, either today or in the future. The whole system is based on that trust. If you buy something, you must pay for it. If you sell something, you are owed for it. And we borrow because we are betting on the future, betting that the investment we make will generate future income, which we can use to repay what we borrowed in order to make the investment in the first place.

A crisis therefore arises when there is mistrust in the payment system, in the debt collection system. Mistrust in financial contracts which are what give us this ability to look ahead to the future. Ultimately, mistrust in money itself.

But what is trust? It’s the ability to rely on someone’s word, or on a signed contract. And this is clearly valuable for an economy; contracts for debts and receivables, which underpin the entire system, must therefore be respected.

Trust in banks is also crucial, because they are the ones that create money ex nihilo by offering credit. The same applies to trust in the central bank. Not only because it is the bank’s bank, but above all because it is in charge of monetary regulation, the linchpin that holds it all together.

If the central bank issues too much central bank money – and without knowing in advance where the cut-off point lies – for too long, and if monetary restrictions are not restored within a foreseeable time period, a serious crisis could occur, on a par with the collapse of France’s assignats during the French revolution, hyperinflation in Germany at the start of the twentieth century, or the recurring monetary crises experienced by certain countries in South America. After that point, there is a risk that the official currency will be spurned. Which could lead to disintegration of the debts and receivables system, in turn triggering disintegration of the monetary system i.e. the potential disintegration of our entire society. In the words of Michel Aglietta, trust in money is the alpha and omega of society.

This trust must under no circumstances be destroyed, otherwise people may decamp to a foreign currency. This is common in less developed countries, but is by no means exclusive to them. That said, if all central banks do the same thing at the same time, it is obviously harder to escape from your own currency by transferring your assets into another currency. Then again, many are able to take refuge in gold. The day could even come when we take refuge in a cryptocurrency issued by GAFA, having become more solvent than the Governments. The cryptocurrency would become a private currency, and a way to circumvent official systems.

In conclusion, money is an institution, and must be managed as an institution, in other words as a whole entity relying on trust and rules. By rules, I mean repayment of debt i.e. monetary restrictions. These rules can be temporarily set aside, but not for long and we must not be fooled into thinking we have found a magic formula for keeping everything working without ever having any restrictions.

Central banks must therefore remain above private interests and the interests of the State, since this is precisely what gives them their legitimacy. There is therefore no room for fiscal dominance i.e. dependence on Governments which would force them to adopt policies resulting in extremely long periods with very low, zero, or even negative interest rates, below the rate of growth, and to inject central bank money into the markets on a continuous basis. At the same time, they must also avoid financial market dominance i.e. the central bank should not be dominated by the financial markets. Central markets must avoid being dictated to by markets clamouring for yet more injections of liquidity under the threat of a stock market crash.

On the contrary, the central bank must defend the public’s interests. It must also protect its credibility. Otherwise in the future it will be powerless, in the event of genuine further need, to use monetary policy effectively and efficiently to support the economy and keep it working, and to keep society itself in check.